This article is based upon Proxy Switcher version 5.11.2 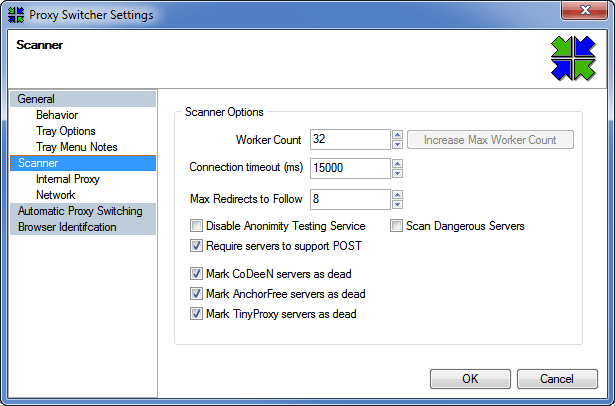 Default: 32
Range: 2 - 48 or 72 - (Standard or PRO version)
This option tunes proxy scanner "worker" count. Raising this increases overall testing speed and network load. If your network connection is inadequate then raising this will cause even working servers to timeout. The value you set here is approximate.
On start of scanning the set amount of scanners will be launched. However the actual running scanner count often is increased if following conditions are met: If both conditions are met then scanner count will be increased to more than 4x of the initially set number.

This button will be visible or enabled only on certain systems which might have certain network limitations. More specifically - limited half-open socket count. Most notable examples of such systems are ones running Windows XP SP2/SP3 and Windows Vista SP0/SP1. This does nothing for newer operating systems.

Default: 15000 ms
Range: 3000 - 60000 ms
Global setting of how much time to wait for a response (fully loaded page) from the server, before declaring it as dead. Some people mistake this with ping, but it's not. Since no PING-ing is actually performed. The default value of 15 seconds (15000ms) is a bit conservative, however the response times on poor networks tend to go up as many tests are made in parallel.
You could set it lower, but there is not much reason to do so. Since you can always sort the results by the response times and pick ones that are lower.

Default: 8
Range: 1 - 24
This is a global options that limits how many times a redirect (HTTP 30x) will be followed. Some of the test targets can issue redirects, which when testing can be followed. However to avoid potential endless loops a global limit was introduced.

Default: off
Values: On/off
To determine anonymity level a special testing service is used. If this is switched off program will not be able determine if the server is Anonymous, Elite-Anonymous etc. This setting might be enabled automatically if the program is unable to reach the testing servers.

Default: off
Values: On/off
Proxy Switcher has a fairly small and limited list of mostly U.S. government IP network ranges built-in. If the server's IP is in this or it's listed hostname contains .gov or .mil it will be sent to 'Dangerous' folder and not scanned. If you enable this option servers will be treated like any others. It can be debated how effective this is, because list is always incomplete.

Default: On
Values: On/off
POST (HTTP) is a request method that's used quite often. On some HTTP proxy servers it is disabled for some reason, which means that quite many web pages will not work correctly without it.

The following 3 options deal with specific types of proxy servers that are known to cause issues.

Default: On
Values: On/off
CoDeeN are a proxy server system created in Princeton University for P2P web caching. There are certain disadvantages to using these servers.

Default: On
Values: On/off
These servers inject ads and in general are not very good.